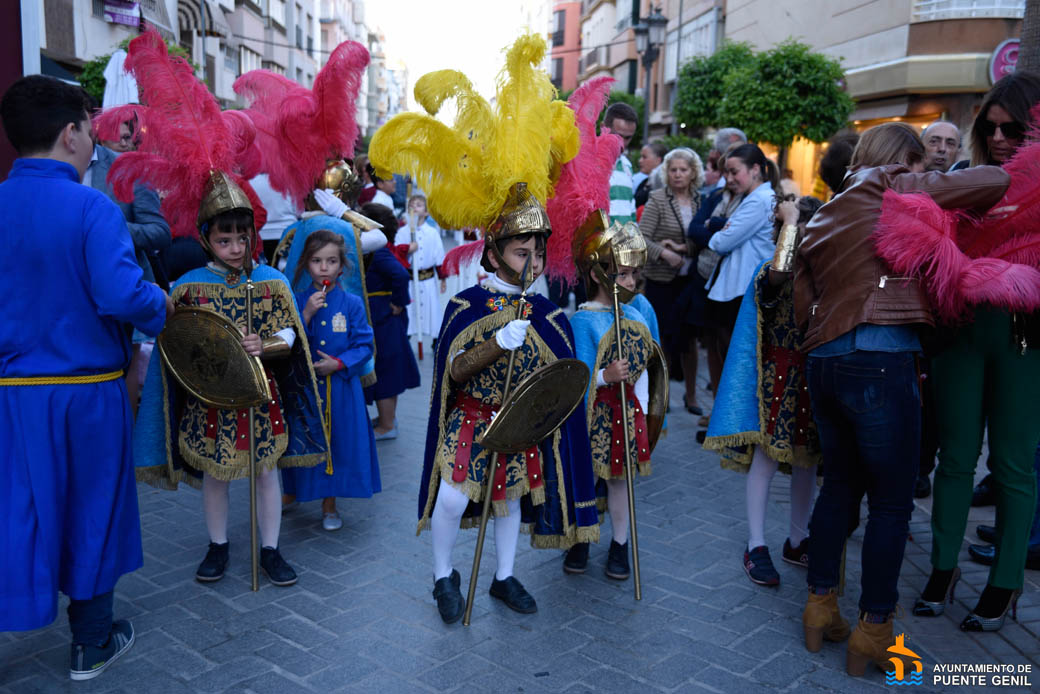 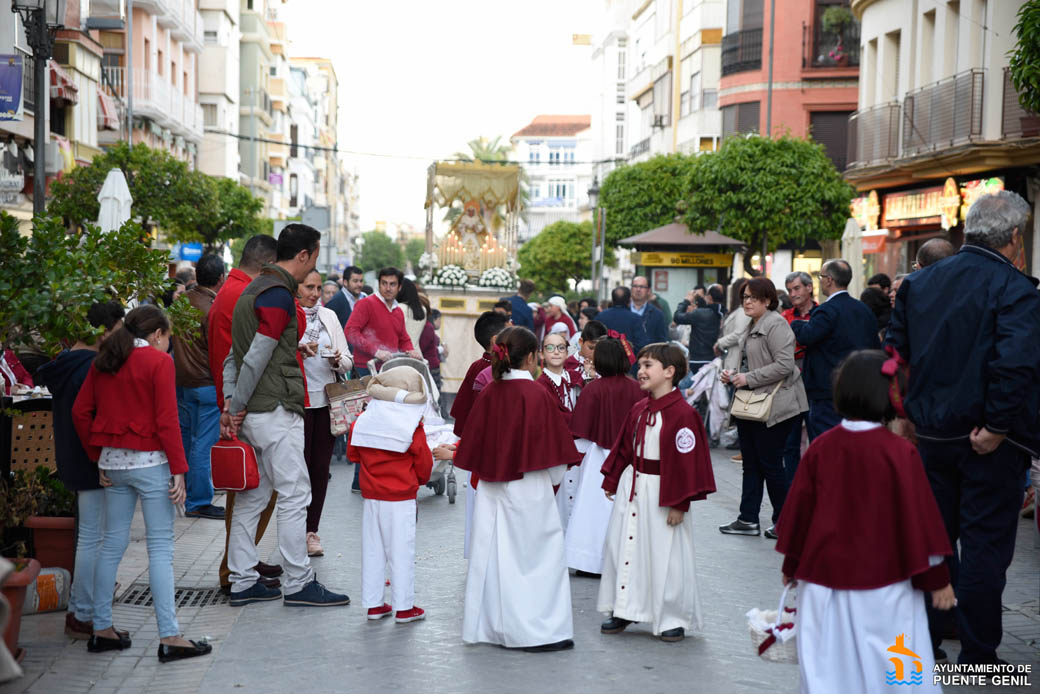 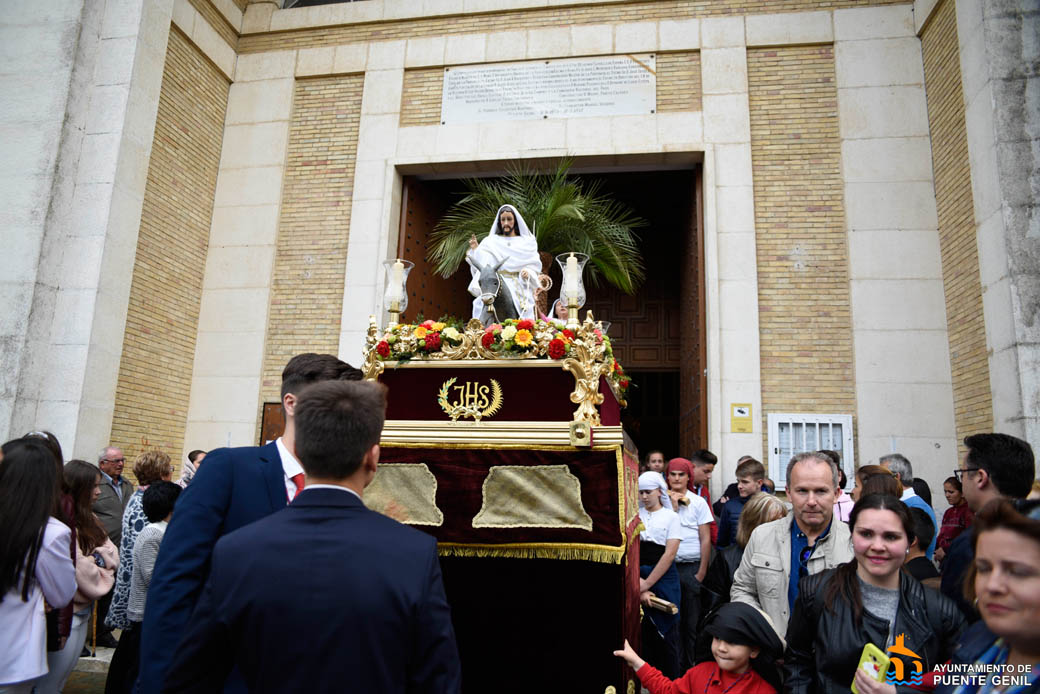 Origin, antiquity and traditional roots of the festival

The local projection of this day has made it possible for the 3rd to be considered a local festival for some decades.

These steps would be, so to speak, the official ones, nevertheless among these they are incorporated and they parade around a thirty more, in which crosses are carried, beautifully exorcised, Images of private oratory in some cases of great artistic value as I will emphasize later, Virgins, Scenes of Mystery. These steps are adorned by themselves, sometimes advised by their parents, grandparents or relatives creating a colorful atmosphere, a show that is repeated year after year of a candor and a singular beauty and in a date in which the spring shows off its attributes and the most diverse flowers from the wild ones to those of garden decorate these simple thrones.

These small steps are accompanied by a large representation of biblical figures, the most peculiar characteristic of the Holy Week. They are dressed by children, with clothes, rostrillos and martyrdoms identical to those used during the Easter Week parades, and offer a spectacle worthy of contemplation when they bow to Jesus the Nazarene in the Santa Catalina Street. These figures correspond to the nearly seventy Bible corporations in the city.

Needless to say, it is an interesting experience to be able to contemplate the small squads of Romans, greens, reds, golds, blues, parading to the sounds of the pasodobles, composed by local musicians and which are the same ones that have been played during the Easter Week.

On the Day of the Cross, the barracks of Puente Genil, headquarters of the Bible Corporation, open to entertain the little ones who are the protagonists of that day so special to them. A day that is dedicated to the small infants, which presents an exceptional coloring, by the very protagonists of the event.

Apart from the processions of the days before and after, most of the festival is held on May 3, although the most interesting time slot is considered the official itinerary as in Holy Week is between the departure at nine in the morning from the Plaza del Calvario, at 10.30 in Santa Catalina Street, at 12 noon in Don Gonzalo Street and in the afternoon from 5 pm in Aguilar Street, and back to the same place of departure.

The evening procession begins at 21:30 in the Plaza del Dulce Nombre, where the chapel of the same name is located and from where another series of small floats accompanied by the respective figures emerge. This procession has a shorter route, so it is considered an official route all the way through the historical centre and mainly through the so-called Island neighborhood, which surrounds the river Genil.

The origin of this peculiar children’s festival dates back to the second decade of the nineteenth century and can be seen in the general archives of the Bishopric of Cordoba, in the correspondence of the then Vicar of the Bridge Don Gonzalo, Francisco de Paula Palma and Perellón, published by D. José Segundo Jiménez Rodríguez, who in the midst of the absolutist era narrated the Church’s efforts to eradicate these ancient traditions, said in his report of April 17, 1819: “Last Sunday a few boys dressed in tunics and rostrillos went out, making the same puppets that are made during Easter Week. They were not carrying the image of Jesus, nor of his Mother, and I saw them walking the streets with these prudes. But the envy of others or the zeal for their traditions or that they had not been invited to dress in sackcloth, prophets, etc. They stoned them in return for their clothing and ended up stoning each other. As a result, three of these boys (they would have been about twelve or thirteen years old) were accompanied by fifteen others…they came as a deputation to ask me for permission to go out next Sunday with formality to represent a procession with Jesus Chiquito and his Sorrowful Mother and that they were going to reach or had already reached the license of the Judge. These things are original!

I rebuked and taught them and they were sent away without anger, because I told them that it was something forbidden by the King and by the Bishop and that the masks were recently forbidden etc. Better they would have understood with a bapuleo than with words, but I know these sheep…”

In these early years, only crucifixes or wooden crosses very much decorated with flowers were carried in procession and the crosses were shrouded in lace. These crosses were displayed every year in a prominent place in the house and when the day came, they were carried in procession by the children of the house. At the beginning of the 20th century, passionist images, which were also privately owned, began to be incorporated. In those days, they were also removed from the niches and bell jars and were carried by the children through the streets of Puente Genil, the thrones being covered with rich blue or red damask fabrics.

Not all of the images in the procession on this day are of outstanding artistic value, some are very good, as will be shown below. There are images from Olot that are more serially produced, but from the beginning of the 20th century, the last group would be made up of images with no artistic value, only devotional, some of modern manufacture and which are incorporated into the processional parade in small steps carried by boys and girls alike. 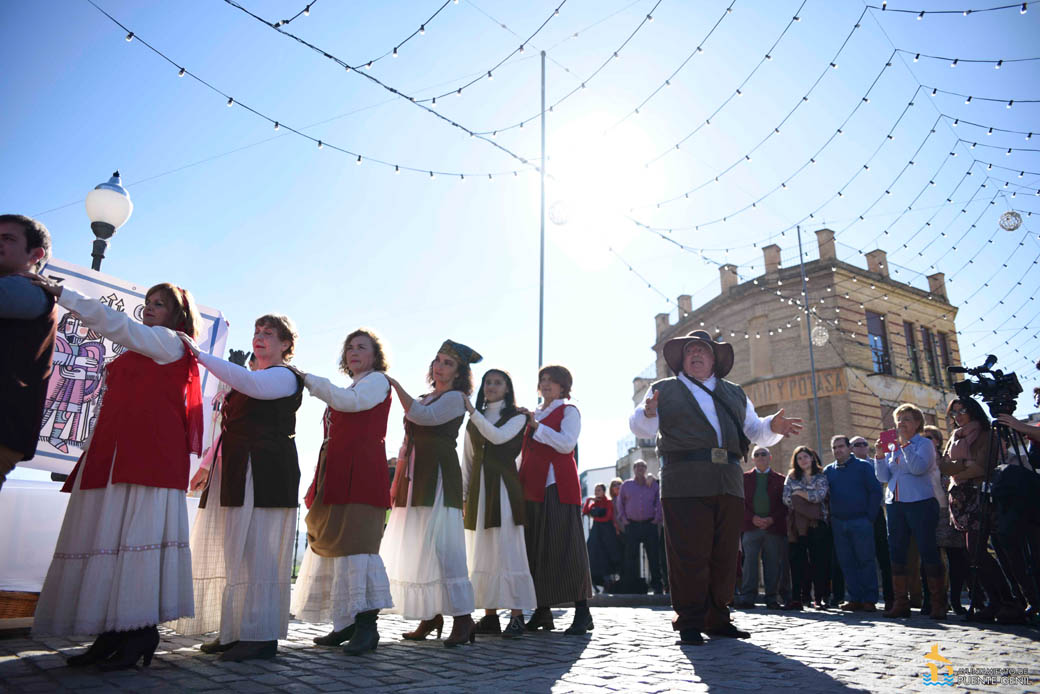 Other Festivals of Interest

Carnival In recent years, they have enjoyed a great deal of public participation, with parades and groups, where the popular… 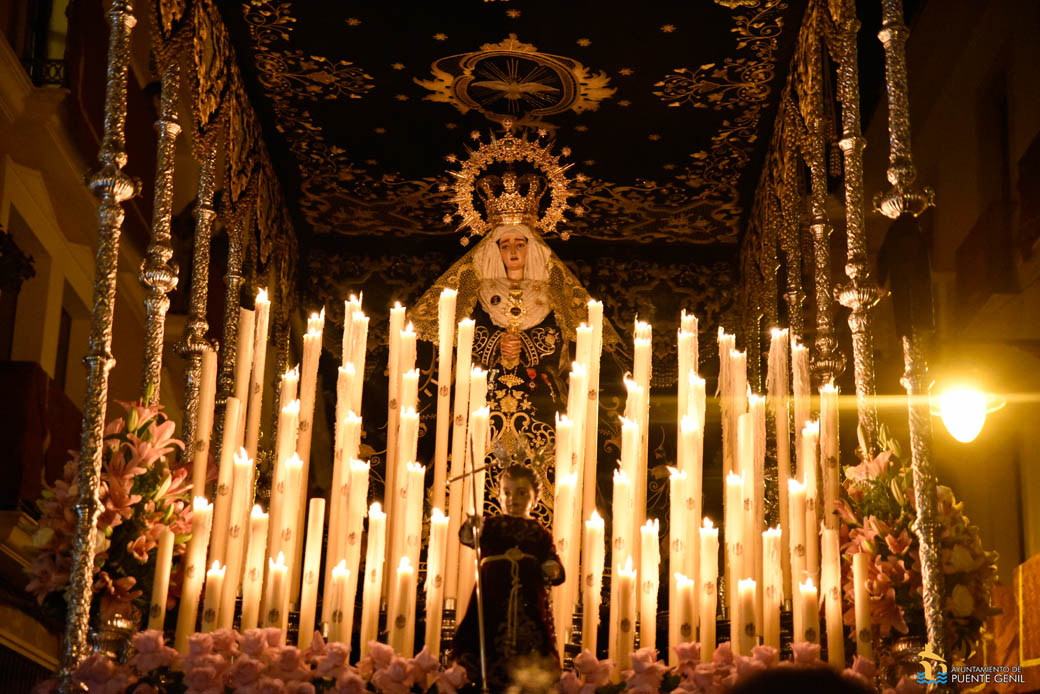 Puente Genil's Easter Week, familiarly known as "The Mananta", is one of the most important and unique manifestations of popular… 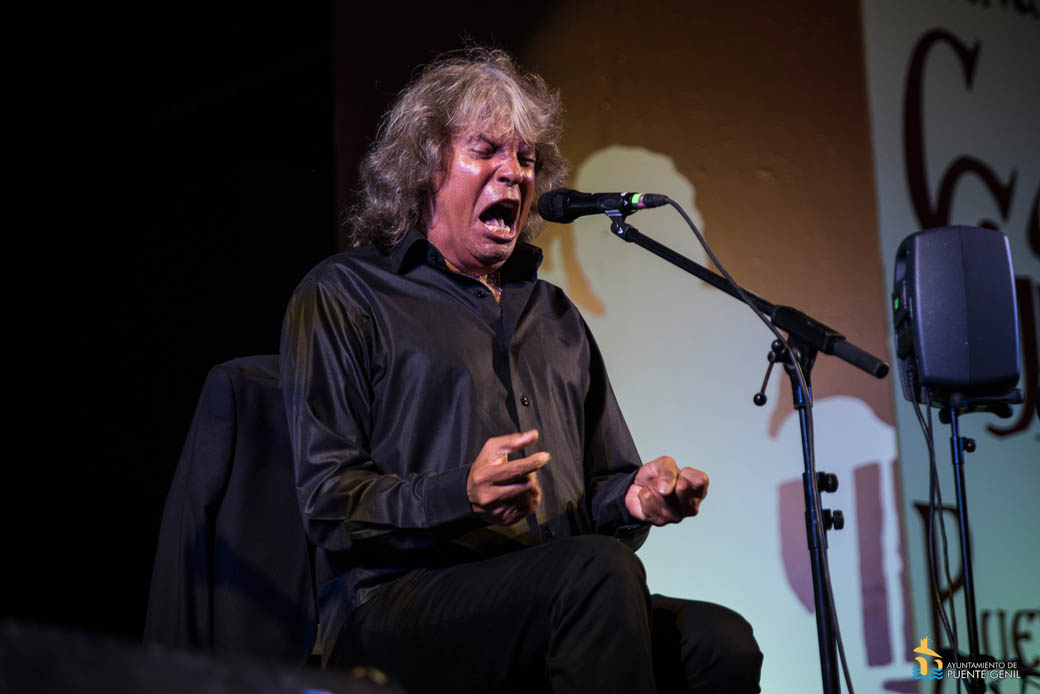 The Festival of Cante Grande Fosforito, in Puente Genil, is one of the most significant realities in the traditional and… 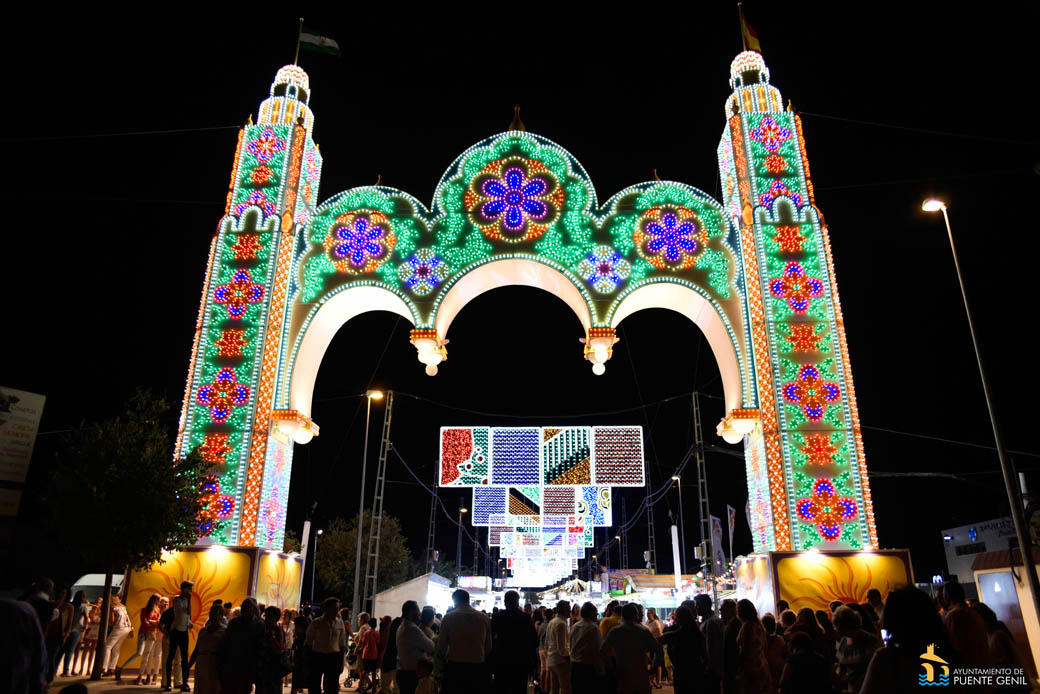 Puente Genil can rightly be proud of having one of the oldest fairs in the region. Since the last third…